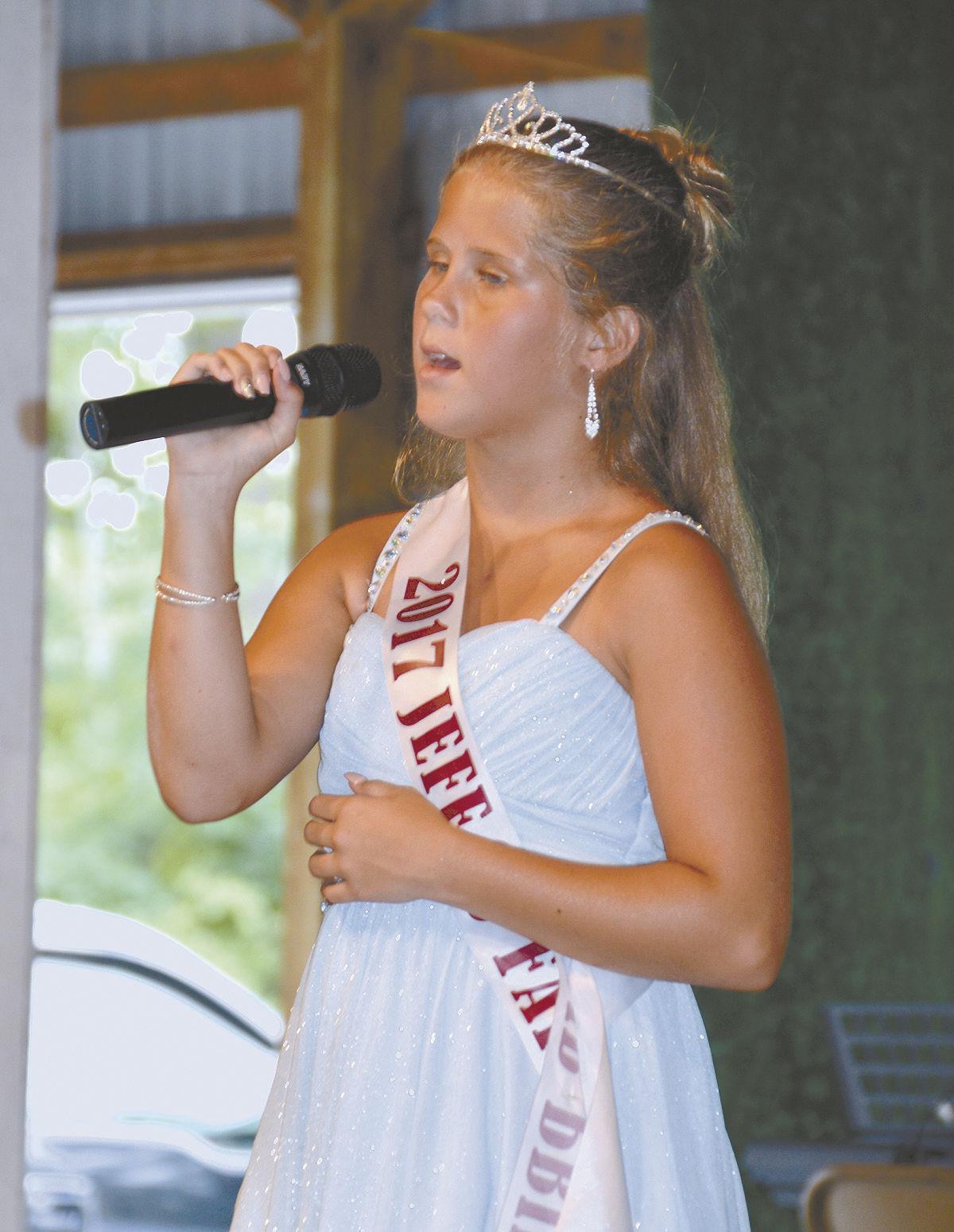 Samantha Barber, Jefferson County's 2017 Fair Princess, sang "Up to the Mountain" during the princess contest Sunday afternoon at the fair. 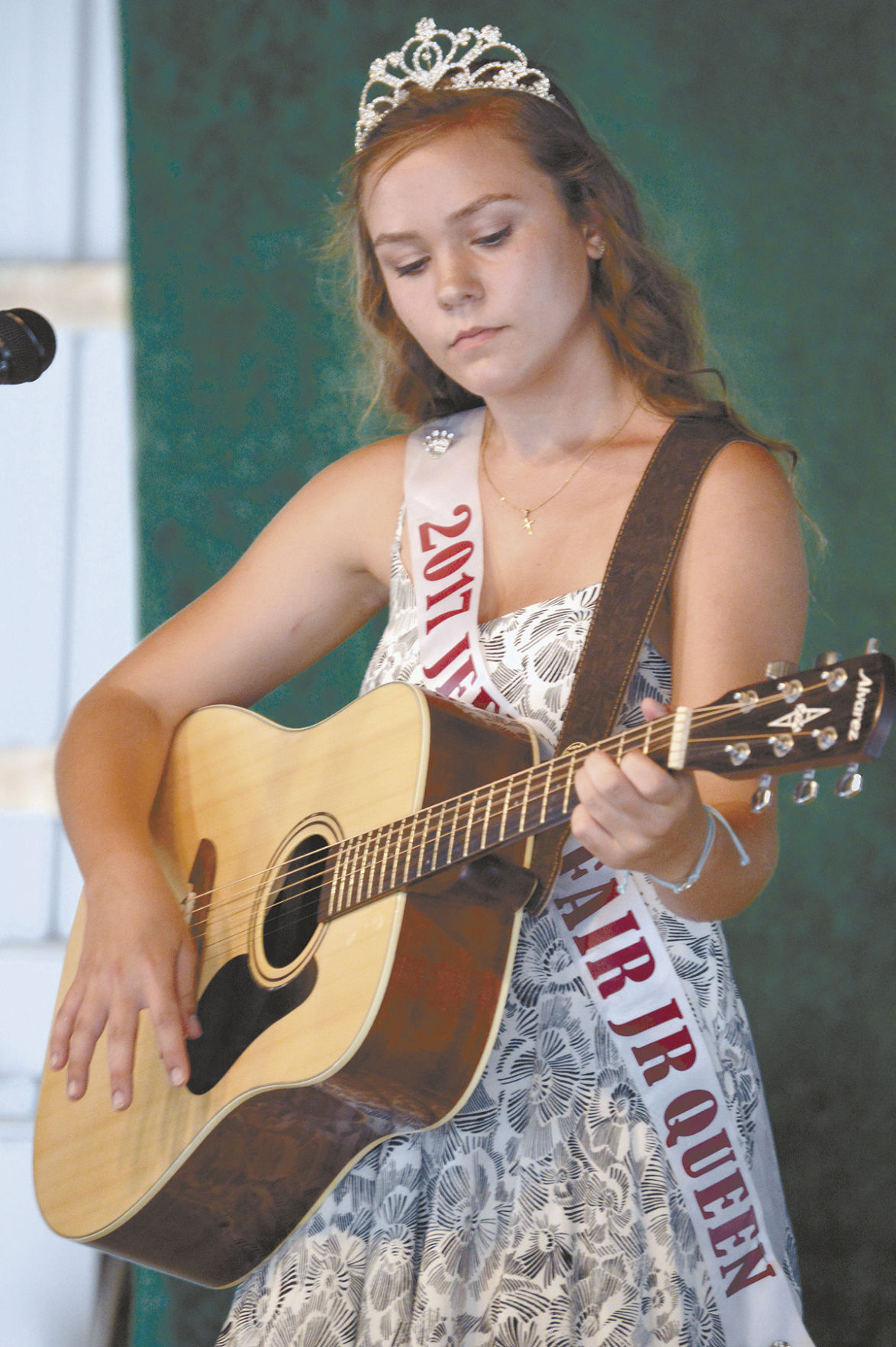 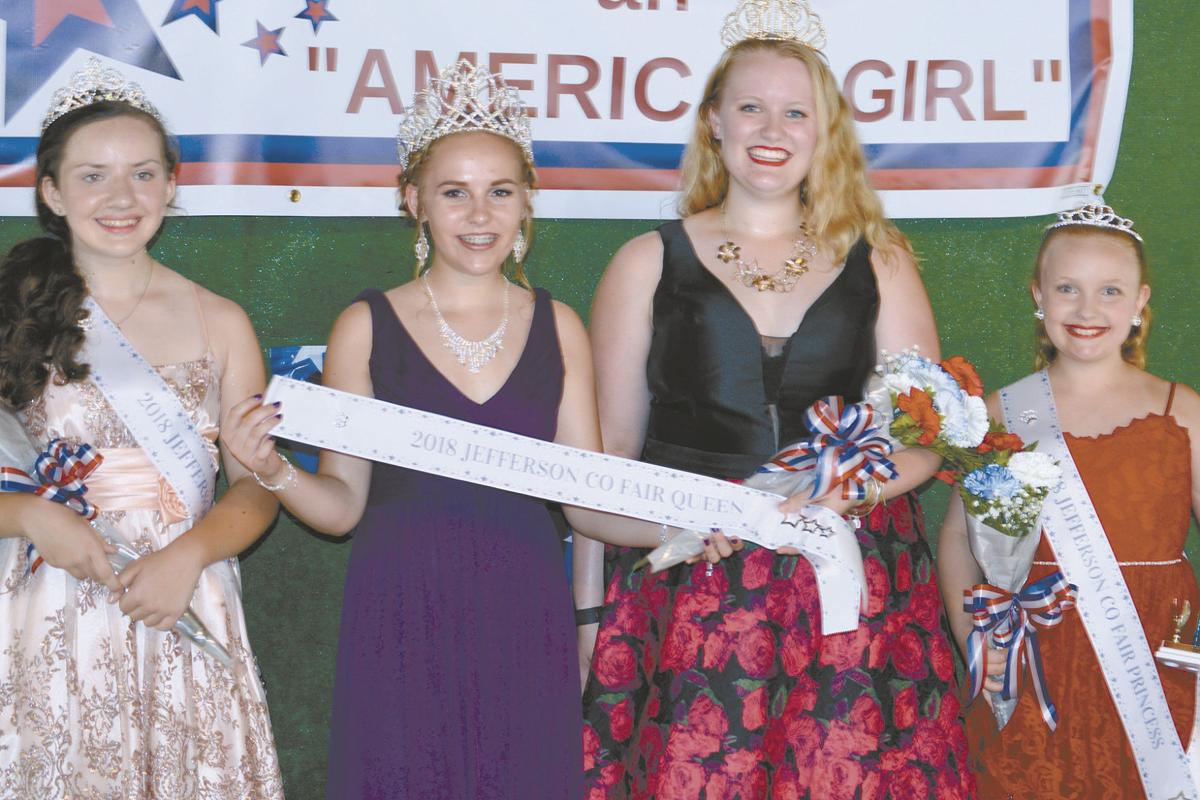 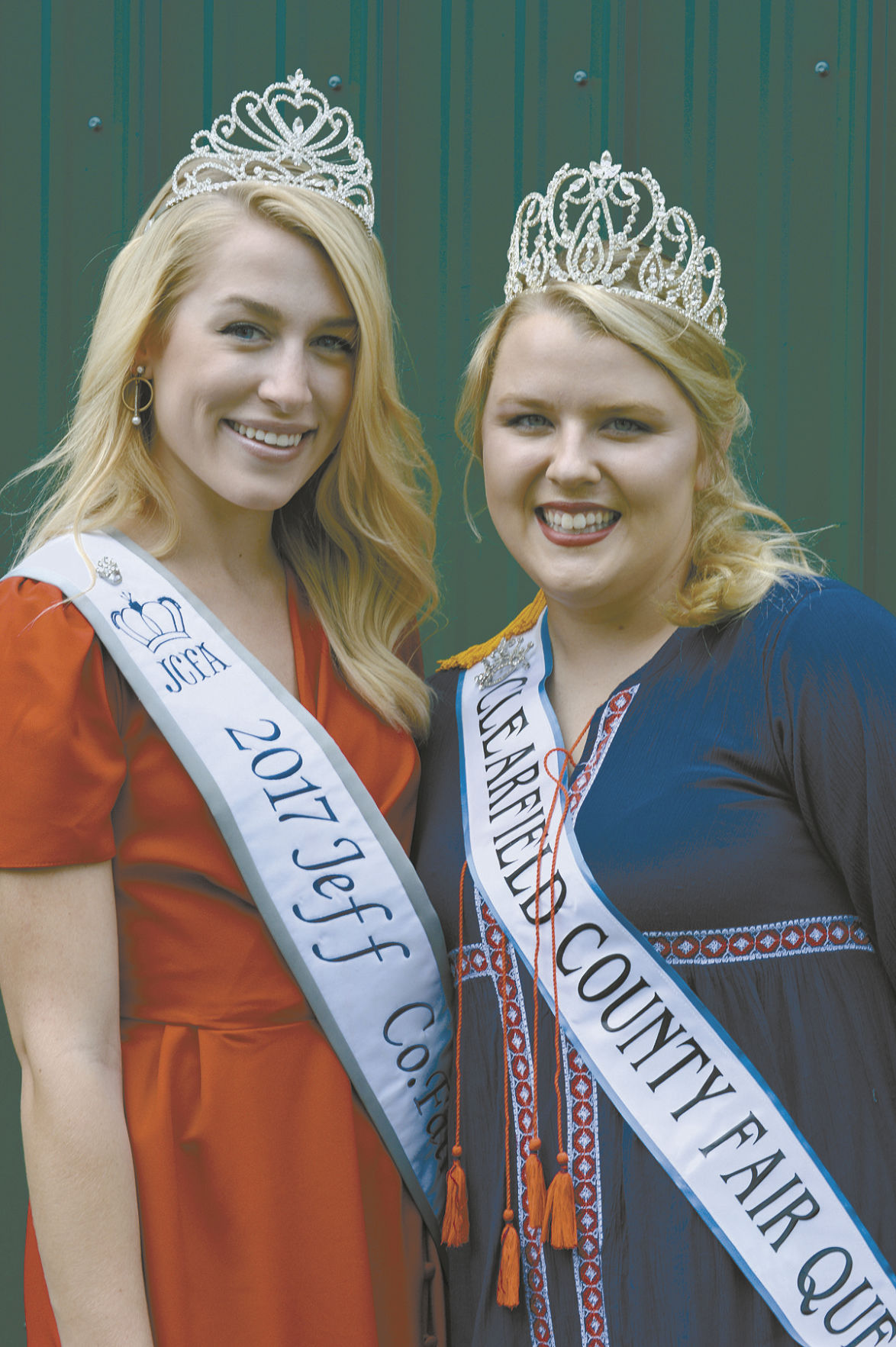 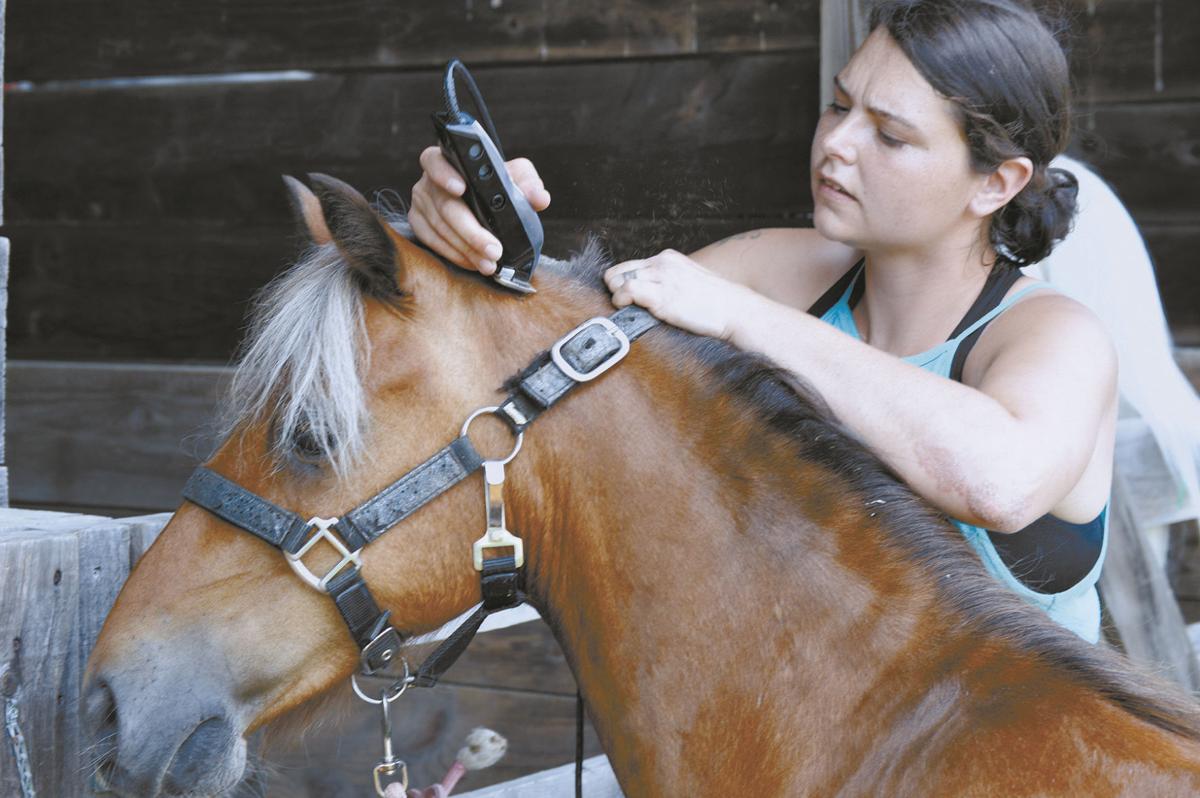 Brenda Hale was busy Sunday afternoon grooming Tonka, a 12-year-old pony, in preparation for this year's events at the Jefferson County Fair. 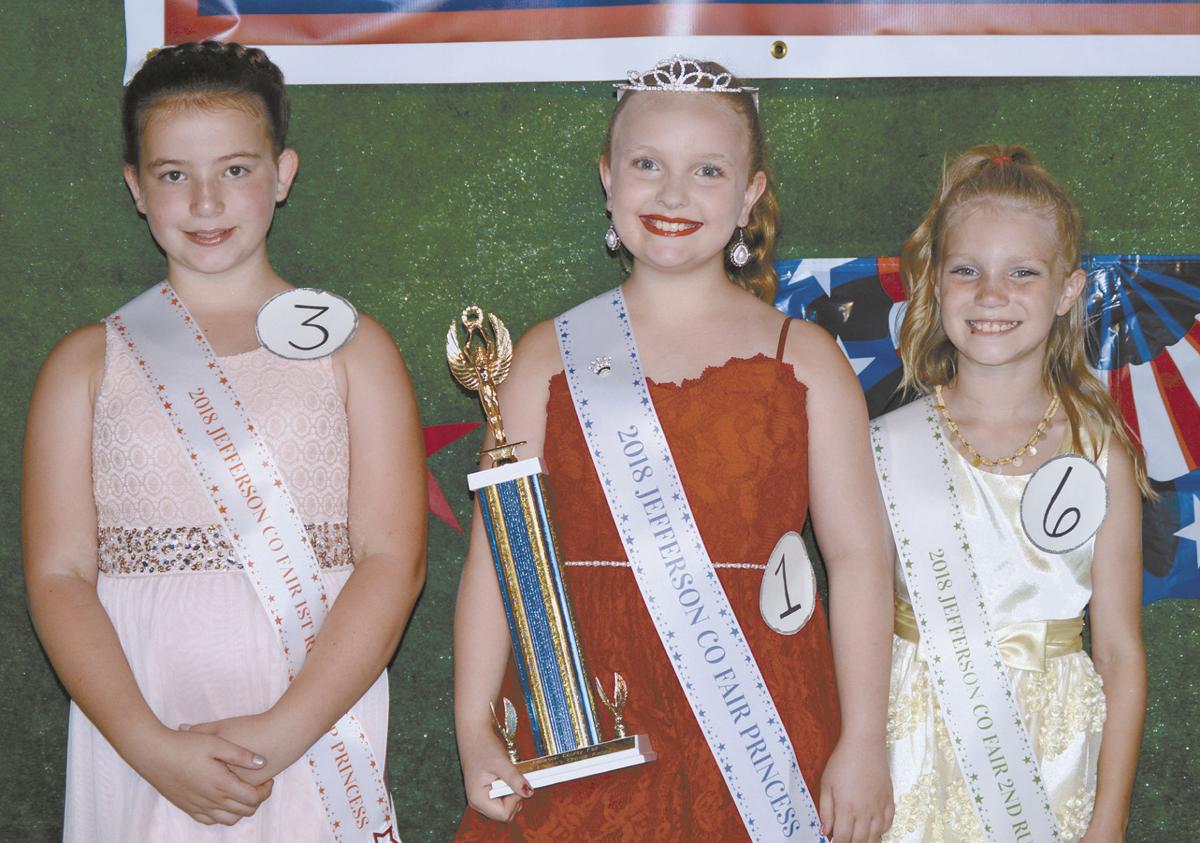 Eight-year-old Rylee Lindenpitz of Brookville is this year's Jefferson County Fair Princess. She was also the winner of the People's Choice Award. First runner-up in the princess contest was Elliana Gow (left) of Brookville and second runner-up was Krista Reitz of Punxsutawney. (Photo by Patti Slaughter) 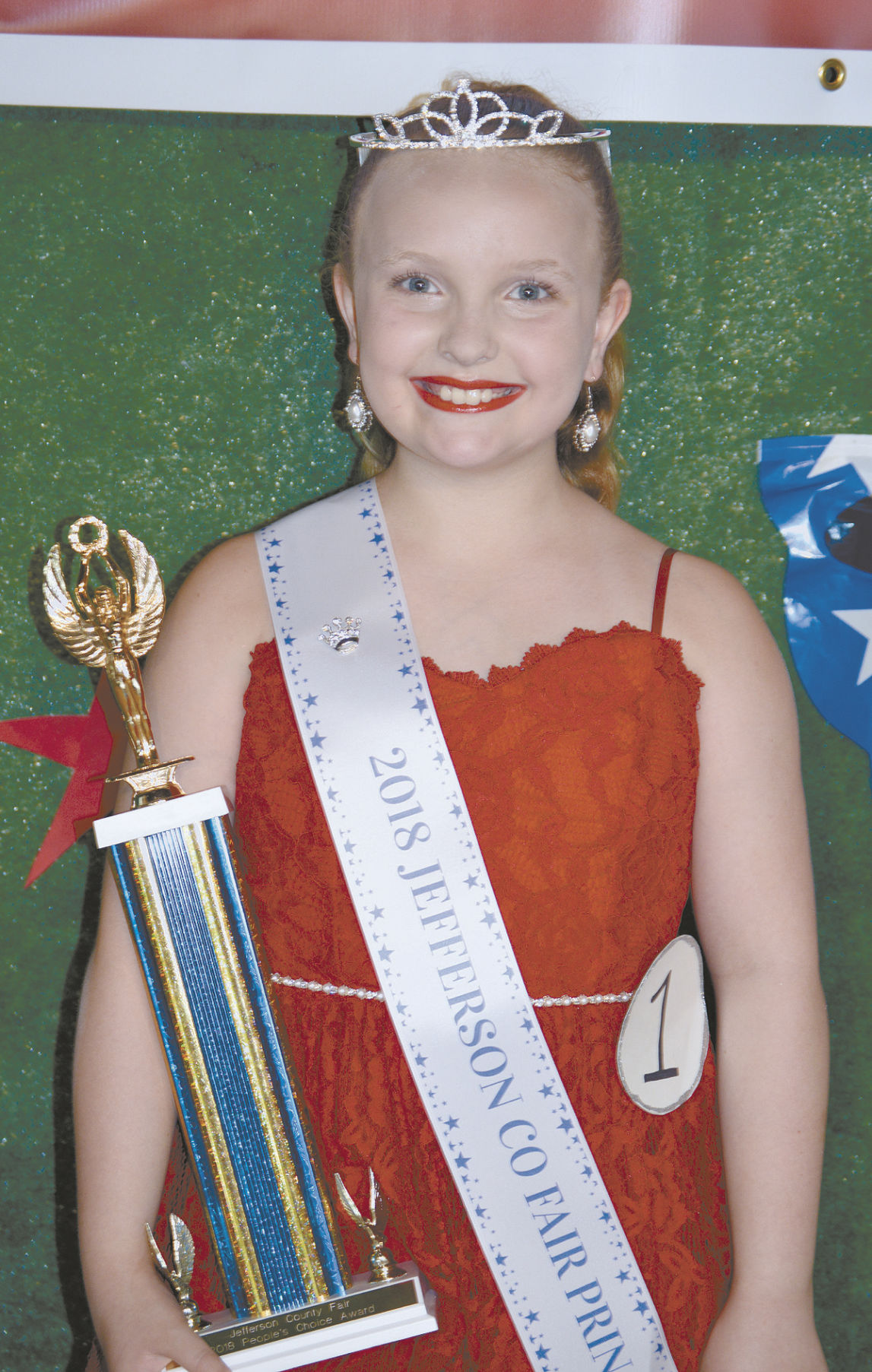 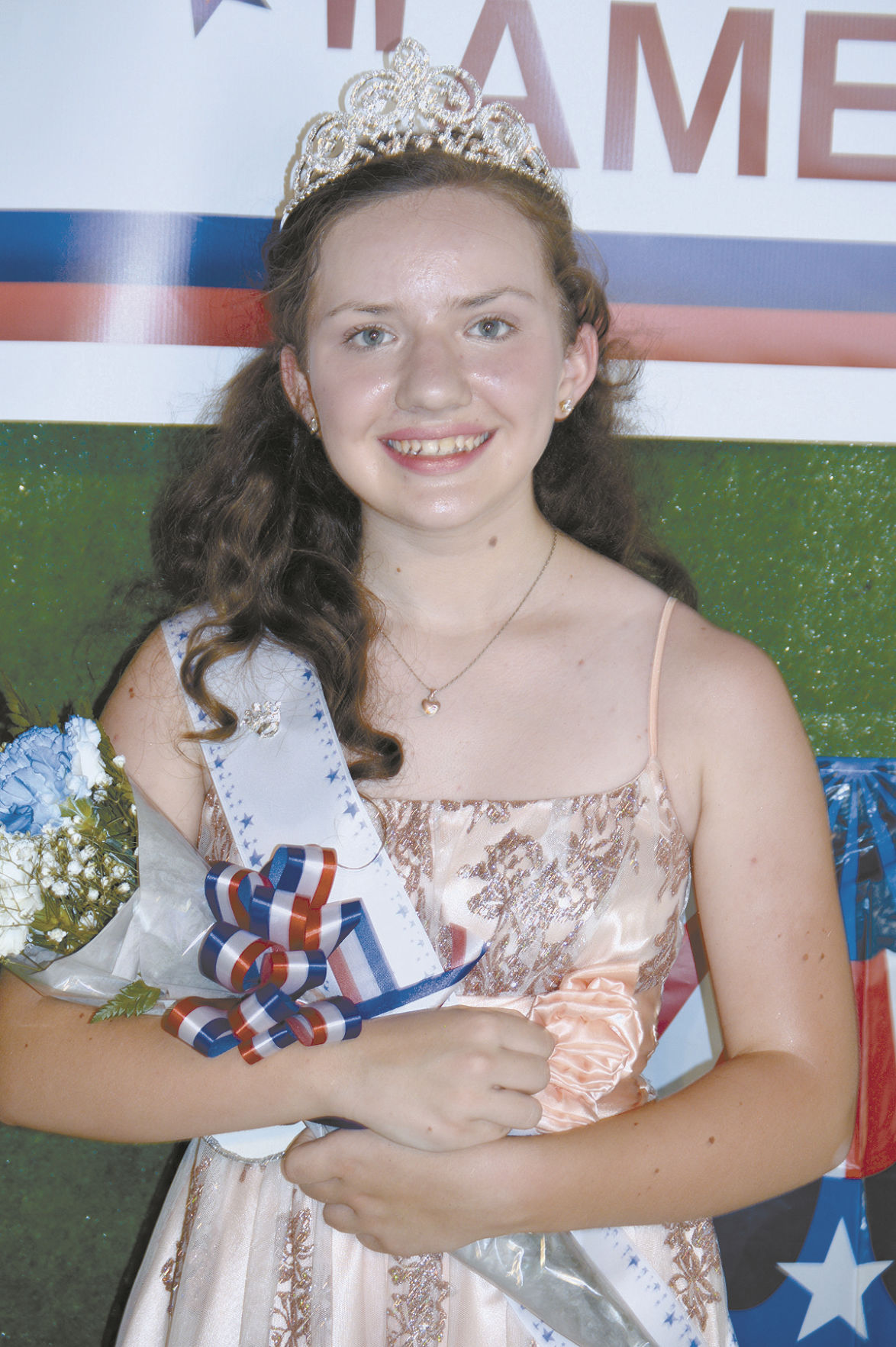 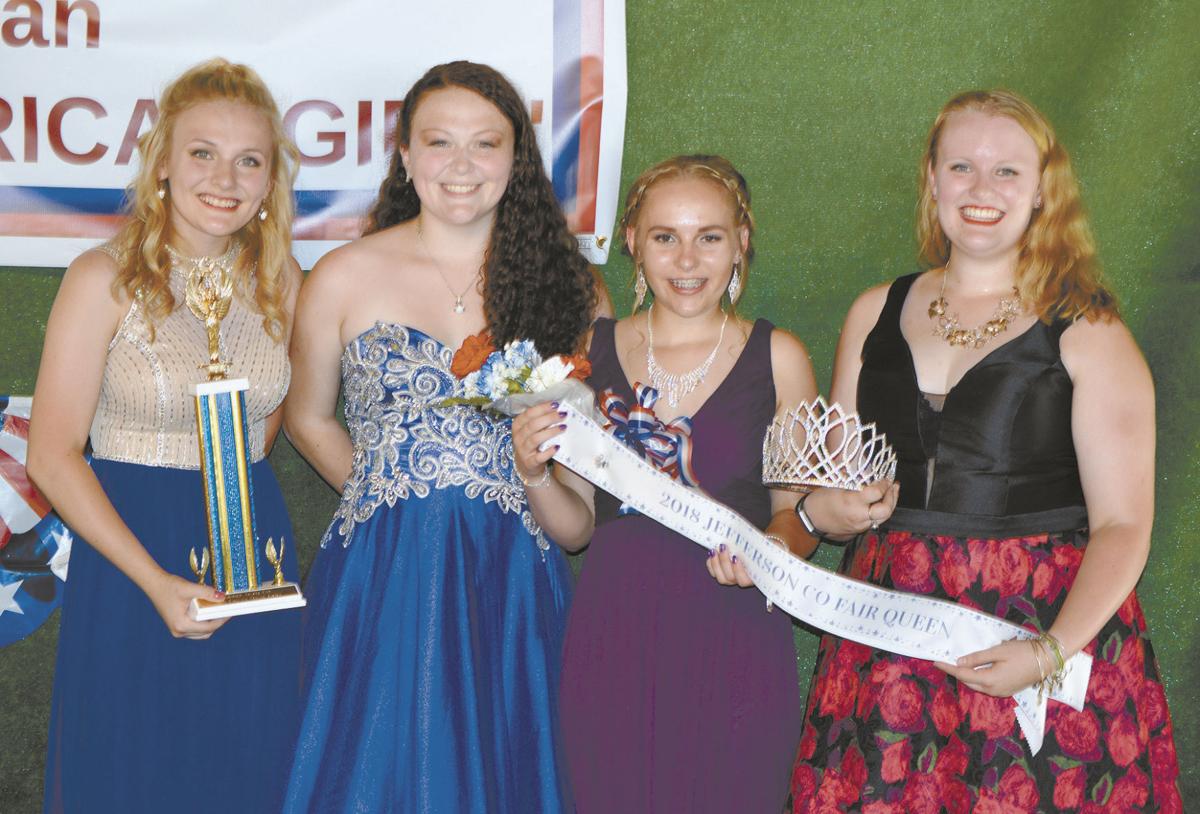 Samantha Barber, Jefferson County's 2017 Fair Princess, sang "Up to the Mountain" during the princess contest Sunday afternoon at the fair.

Brenda Hale was busy Sunday afternoon grooming Tonka, a 12-year-old pony, in preparation for this year's events at the Jefferson County Fair.

Eight-year-old Rylee Lindenpitz of Brookville is this year's Jefferson County Fair Princess. She was also the winner of the People's Choice Award. First runner-up in the princess contest was Elliana Gow (left) of Brookville and second runner-up was Krista Reitz of Punxsutawney. (Photo by Patti Slaughter)

BROOKVILLE — For the first time in the history of the Jefferson County Fair, co-queens are presiding over the full week of activities. The selection of co-queens is only one of the events that have started this year’s fair on a banner run.

Tuesday night Rachel Grubbs of Brockway was presented the Friends of the Fair Award and hundreds of exhibits are filling the Joe Shields general exhibits building.

Following an intense competition, which involved a pre-pageant interview with the judges, an impromptu question period and a speech on “Why you should come to my fair,” Morgan Bish of Brookville and Danielle VanSteenberg of Corsica were crowned co-queens of the 2018 Jefferson County Fair.

Jefferson County Fair Authority member Toni Facchine said “the votes were so close they were counted and audited four times.” Each of the queens will receive a $1,000 scholarship for her education.

Also competing in the queen’s pageant were Tia Barnett, Kylee Fiscus, Ryanne Lindenpitz and Regan Reitz, all of Brookville. Lindenpitz won the Peoples Choice Award trophy and Reitz was named Miss Cogeniality by her fellow contestants, winning a $100 cash prize.

Reigning as this year’s Junior Fair Queen is Ava Orcutt of Corsica. Her talent presentation was a self-choreographed dance to “How Far I’ll Go.” Members of her court are Mercy Smith of Punxsutawney, first runner-up, and Madelyn Newcome of Brockway, second runner-up. Grace Preston of Brockway won the Peoples Choice Award trophy.

The fair princess crown was awarded to Rylee Lindenpitz of Brookville, who also won the Peoples Choice Award. Members of the princess court are Elliana Gow of Brookville, first runner-up, and Krista Reitz of Punxsutawney, second runner-up. For her talent presentation, Princess Rylee did a self-choreographed dance routine.

Also competing in the princess contest were Nora O’Donnell of Brookville, Emma Wilson of Sigel and Calista Reitz and Hannah Dehner of Punxsutawney.

Pennsylvania’s Secretary of Agriculture, Russell Reading, toured the fairgrounds Tuesday evening. During his visit he presented the prestigious Friends of the Fair Award, which is awarded each year to an outstanding volunteer nominated by the fair authority.

Grubbs has been a volunteer with the fair for many years, working in the office at the fairgrounds and serving on the finance and fundraising committees. “Basically she helps wherever she is needed. She has always been a volunteer,” Facchine said.

Besides volunteering with the fair, Grubbs has been a volunteer for Camp Friendship and ARC. She works on the election board in Snyder Township and is an active member of the Presbyterian Church in Brockway.

On hand to see their mother receive the award were her children, Chuck, Mark and Kathy.

More than 1,400 entries will be found in general exhibits building. “There are 7 or 8 wooden pallets, the decorated hands donated this year by Pat Catan’s, lots of photos” and many more unusual displays, along with all the fruits, vegetables, flowers, quilts and more, Facchine said. “This year we have 60 first-time exhibitors.”

The fair officially opened Sunday afternoon with a community church service. The guest speaker was the Rev. Joni Williams, pastor of the Faithful Followers Charge of the United Methodist Church. She spoke on God’s design, using Psalm 104 as her text. “It is a beautiful thing that we are free to begin our county fair with worship,” she said. “It is a time to celebrate, to praise God for all his wonders around us.”

Music was provided by Andy Burkett and Rachel Heer, members of the Christian band, To The Throne.

Continuing through Saturday, fair-goers will find plenty to keep them busy.

Wednesday is Sarvey Fun Day, when admission is half price or $4 per person. The track event will be the popular truck and tractor pull by Full Pull Productions.

Thursday’s activities will begin in the morning with the annual senior citizens picnic, followed at 12:30 p.m. by a concert by the Village Voices of Brockway. Thursday night the crowd-pleasing mud bog will begin at 7 p.m. Throughout the day members of the Jefferson County Farm Bureau will be on hand to collect non-perishable food items to be donated to local food banks in the second annual Harvest for All food drive.

Friday night the popular Rawhide Rodeo will be back, with cowboys and cowgirls competing for points in riding and roping events.

The fair will close on Saturday, with Figure 8 and Tuff Truck races at 4 p.m., followed by more Tuff Trucks and the demolition derby at 7 p.m. Fiddle contests will be held during the afternoon on the community stage.

Besides the grandstand events, fair-goers will have a chance to vote for their favorite baby, with 27 babies entered in this year’s contest. The winner will be announced Saturday night, and proceeds from the contest will be donated to the Penn Highlands DuBois NICU.

Rounding out the activities at the fair are daily performances by Circus Stella, T & D Wood Carvings, community stage performers and karaoke by Dazzle U, dozens of livestock and equipment displays, carnival rides and games by Bartlebaugh Amusements, and more than 20 vendors offering the food that can only be found at a fair.

Admission to the fair is $8 per person and includes parking and admission to all fair activities and grandstand shows. Gates open at 2 p.m. through Friday, and at 11 a.m. on Saturday.